When will inflation slow? Pay attention to housing


A correction in the housing market as mortgage rates reach 20-year highs is underway. While overall price growth has cooled, though, the housing components of the two inflation reports—the consumer price index and the personal consumption expenditures price index—have shown no signs of peaking.

We estimate an approximately 18-month lag between changes in housing prices and in the housing components of inflation. That means we do not expect housing inflation to peak until the third quarter of next year or to fall to the pre-pandemic level until late 2024.

The Federal Reserve will almost certainly need to lift its policy rate above 5% and be prepared to hold it there, because inflation driven by housing tends to be persistent.

We used more than 20 years of historical data to estimate the correlation between current housing inflation and past housing price growth.

The results show that housing inflation in the consumer price index can be best predicted using data on housing price growth from 17 months prior, and in the personal consumption expenditures index from 19 months prior. There is roughly an 18-month to two-year lag before policymakers can assess the impact of changing housing prices and inflation.

The correlations are also strong between housing prices and the housing components of inflation reports, suggesting that housing price growth can be a reliable predictor for housing inflation despite the different methods used to calculate the two series.

First, we track the correlation between the two:

Correlation between housing prices and housing component of inflation reports 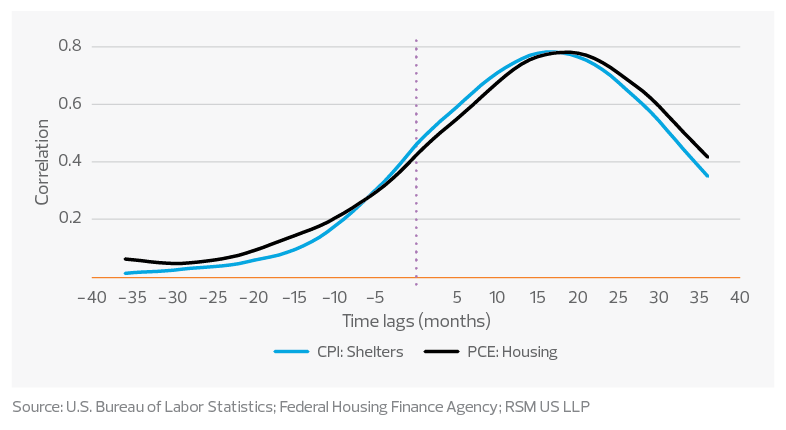 Then, we can forecast the housing inflation components for both the CPI and PCE reports: 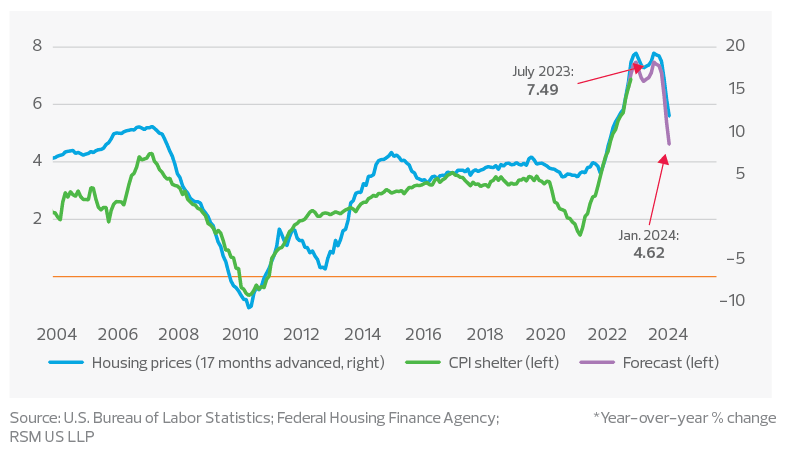 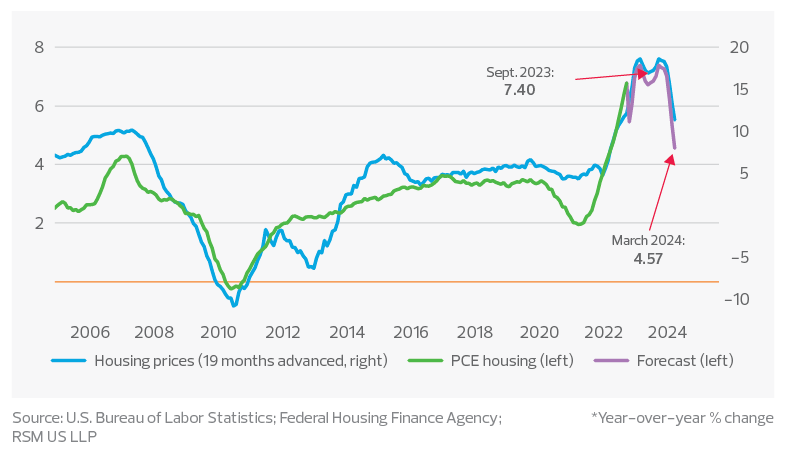 At their peaks in the third quarter next year, the year-over-year housing component growth rates would be 7.49% for CPI and 7.4% for PCE.

Those would translate to 2.4 and 1.3 percentage-point contributions to overall CPI and PCE inflation, respectively.

By the first quarter of 2024, housing inflation from both reports would be 4.62% and 4.57% for CPI and PCE, respectively, remaining substantially elevated above pre-pandemic levels.

With housing accounting for the largest portion of total consumer spending in both inflation reports—more than 32% in CPI and 17% in PCE—we expect inflation to stay sticky throughout next year, especially core inflation, which strips out the more volatile food and energy prices and affects the central bank’s policy path.

The Fed has signaled it will consider the lagging impact of monetary policy, particularly regarding the housing market, to determine the pace of its rate increases.

While we acknowledge that anecdotal evidence now shows rents possibly peaking, our interpretation of the data suggests that to pause or pivot on rate hikes would most likely result in a series of stops, starts and reversals in the policy path.

In the end, that approach would prove unproductive and put the anchoring of medium- to long-term inflation expectations at risk.

Long and variable lags associated with housing inflation should concern the Fed in two ways:

Housing's lagging reaction to rate increases will make the Fed's job more complicated for months to come, even as housing inflation eases as anticipated.

While there are signs of inflation slowing, it will most likely not go back to the target rate anytime soon, which supports our forecast of a 3% core inflation rate by the end of next year as the economy continues to transition to a higher-priced environment.

This article was written by Joe Brusuelas, Tuan Nguyen and originally appeared on 2022-12-08.
2022 RSM US LLP. All rights reserved.
https://rsmus.com/insights/industries/real-estate/when-will-inflation-slow-pay-attention-to-housing.html